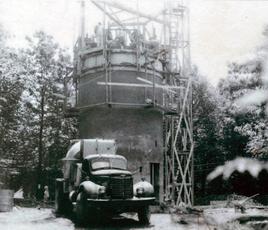 Clarence Schock, our benefactor, overcame severe personal frustration with those who vandalized his wooden tower structures in the 1940’s and 1950’s when he ordered the construction of the concrete tower that is located on top of Governor Dick’s Hill.

The 66-foot-tall tower, built in 1954, affords hikers a view of five counties: Lebanon, Berks, Dauphin, Lancaster, and York.  As Clarence proudly wrote in the Elizabethtown Chronicle in 1954, “Those who climb this tower will be able to overlook surrounding trees … and obtain the magnificent view which is there obtainable.”  He had the tower built at his own expense simply for the public to enjoy that view.

During the almost 70 years since, that view had become obscured by the “surrounding trees” growing very tall.  Today, thanks to a plan implemented to remove those trees, that view enjoyed by Clarence is again available to everyone.

These plans required the control of invasive species, and the area will be replanted with native trees and shrubs that have growth patterns consistent with maintaining Clarence’s long-stated goal that this view be enjoyed by everyone.  New plantings will have to be behind a fence to protect them from the over-abundant deer browsing them during early growth.
Photo credit:  Lee Wells

Not only are we able to marvel at the view that caught Clarence’s attention and moved him to create a perpetual gift for the public, but it is preserved for future generations of people who will enjoy a forest hike to see that "magnificent view" .